Organic Germanium is known for it’s broad reaching health benefits and this fine, white, crystal Monoatomic powder is a readily absorbed, and mixes well in juices, smoothies, and is great for cooking. Available in 1g. 5g. 10g. and 100g. sizes.

What Are the Health Benefits of Germanium?

Garlic: a dietary source of germanium.

Germanium is a white, lustrous, brittle metal and ultra-trace mineral that was discovered by Clemens Alexander Winkler in 1886. There are two forms of germanium: inorganic, which is used in manufacturing processes, and organic, which has been found to be health-protective to animals and humans.

In a landmark intervention study, a 47-year-old female with pulmonary cancer refused further medical treatment. After seven months of treatment with Germanium Sesquioxide (7.2 g/day with dose reduced toward the last month), she became cancer-free.

Amyloidosis is a disorder characterized by deposits of amyloids, abnormal proteins that cannot be used or broken down by the body, adversely influencing the normal functioning of the affected organs. In a study of two groups of mice, one group received 300 mg/kg of Ge-132 for 22 months, while the other received 30 mg/kg. Results showed the control mice developed senile amyloidosis.

Using rats on low-calcium diets, researchers found that administration of Ge-132 to one group of rats resulted in higher femur cortical bone indices in comparison with the control group. This suggests that Ge -132 inhibited the reduction of bone strength, loss of bone mass, and cortical index by osteoporosis.

Research has shown that administration of Ge -132 induces interferon-gamma levels, which in turn increase the activity of NK cells and macrophages. Interferons are glycoproteins that inhibit the growth and proliferation of viruses, and natural killer cells, macrophages, neutrophils, leucocytes, are part of the body’s defense system.

Organic germanium is touted as a remedy for a range of conditions. It’s said to stimulate the body’s immune system and protect healthy cells. It’s promoted as a treatment for conditions such as:

The organic germanium compound can be regarded without exaggeration as an effective means of combating almost any disease. Nonetheless, for assuring its efficacy and the health of the body, the following two conditions have to be met. One is to keep a well-balanced diet in order to maintain the acid-alkali equilibrium of the body fluids. The other is to relieve stress to keep a stable mental state for maintaining the equilibrium of the autonomic nervous system. – Kazuhiko Asai, PhD
Germanium is a trace mineral that exhibits the properties of both, metals and non-metals. It was first discovered in a mine near Freiberg, Germany in 1885. 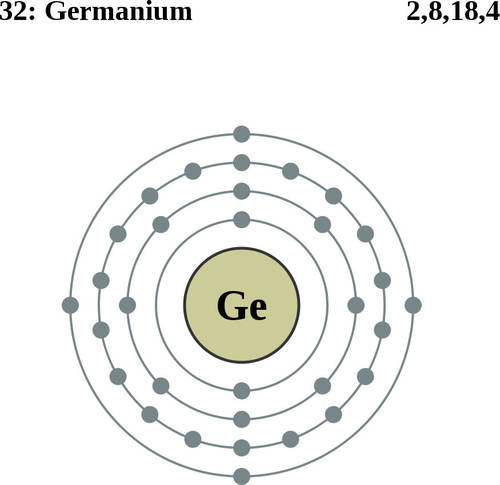 A German chemist, Clemens Alexander Winkler isolated a new element from the ore and named it germanium.  Germanium is a rather abundant element in the earth’s crust. It can be found in very high levels in the water of Lourdes, France, where people continue to travel to experience “miraculous” healing. Germanium rarely forms its own deposits, but can be found in small quantities in the ores of lead, zinc, and copper, for example. High concentrations were found in certain coal deposits. Most germanium for industrial use is obtained from zinc ores.

The germanium atom is structured in such a way that it accepts and transmits electrons, giving it a highly valued semiconductor capability. In its inorganic, metallic form, germanium has no therapeutic value whatsoever, but it is widely used in the electronics industry for transistors, fiber-optics, and other diverse applications. On the other hand, organic germanium effectively stimulates electrical impulses on a cellular level and plays an important role as an “oxygen catalyst” within the human body.

Germanium was found in fossilized plants as well as in some foods, certain mineral waters, and in healing plants and herbs. However, it took many decades of persistent research to identify and confirm the healing properties of this mineral.

Japanese researcher, Dr. Asai who dedicated more than thirty years to the investigation of germanium, found out that some plants and mineral waters that are well known for their therapeutic properties also contain relatively high concentrations of germanium. The list includes garlic, broccoli, celery, aloe vera, comfrey, chlorella algae, ginseng, watercress, pearl barley, and shiitake mushrooms. The content of germanium in these plants depends on the soil in which they were grown.

In 1967 Dr. Asai synthesized a new compound that received the name “organic germanium” or germanium-132 (bis-carboxyethyl germanium sesquioxide). Although this compound was created in the laboratory, it is called organic because it contains carbon atoms just like any other organic substance.

Verified clinical research confirms both the safety and the efficacy of organic germanium.

Regular intake of organic germanium may alleviate many health concerns and slow the aging process. In Japan and in Russia organic germanium is used in alternative cancer therapies because of its ability to modify the body’s biological response to tumors.

Most chronic diseases start quietly on a cellular level. The cellular injury affects the cell’s ability to maintain a steady, normal, or adaptive homeostasis. Homeostasis is the ability to compensate for any changes caused by physical, emotional, or environmental stress. Homeostasis is the necessary condition for optimal health. Lack of sufficient oxygen supply to the cells is considered to be the primary cause of cellular injury. Cells die when they do not have a sufficient oxygen supply. The only cells that thrive without cellular oxygen are the cancer cells.

“Cancer, above all other diseases, has countless secondary causes. But even for cancer, there is only one prime cause. Summarized in a few words, the prime cause of cancer is the replacement of the respiration of oxygen in normal body cells by the abnormal process of the cancer cell.”

Since organic germanium is known to enhance the oxygen supply to the cells, it may be considered the supplement of choice in cancer prevention and in cancer therapy.

Researchers also confirmed that organic germanium increased the production of the interferon in the body. Interferon is produced by the leukocytes in the presence of pathogens. This probably is the reason why germanium is so effective in fighting off viruses as well as tumor cells. A study published in the Journal of Interferon Research* concluded that “Organic germanium restores the normal function of T-cells, B-lymphocytes, natural killer cell activity, and the numbers of antibody-forming cells. Organic germanium has unique physiological activities without any significant side effects.”

Germanium sesquioxide is a novel mineral supplement with significant potential for maintaining health and extending life.  The high-purity organic complex is safe, with much lower toxicity than the inorganic form.  This product has been in use since 1967 in Japan and is now gaining popularity in the West.  Germanium sesquioxide aids the body’s natural defenses against disease and aging.  Its primary action is the restoration of the natural balance of cells in the immune system.

Germanium is a mineral found in the soil, in foods, and in many healing herbs such as Aloe Vera, garlic, and ginseng.  It is known to initiate healthy oxygen flow in the body tissues and aids in the normal functioning of the immune cells.  It is also known to maintain a healthy balance between various body functions and is a water-soluble dietary supplement.

Germanium is not classified as a trace mineral but as an ultra trace element in human nutrition and is said to possess a variety of health benefits.  Japanese Shitake Mushrooms, ginseng, garlic, and other folk remedies which have survived the test of time are all rich in Germanium.  Germanium is, of course, not the only active ingredient in these plants but the fact remains that these are healing plants and germanium alone has been found to be a highly successful adjunct in the treatment of cancer.

While scientific research has not been conclusive, some people are said to have experienced the various benefits:

This website uses cookies to improve your experience while you navigate through the website. Out of these, the cookies that are categorized as necessary are stored on your browser as they are essential for the working of basic functionalities of the website. We also use third-party cookies that help us analyze and understand how you use this website. These cookies will be stored in your browser only with your consent. You also have the option to opt-out of these cookies. But opting out of some of these cookies may affect your browsing experience.
Necessary Always Enabled

Any cookies that may not be particularly necessary for the website to function and is used specifically to collect user personal data via analytics, ads, other embedded contents are termed as non-necessary cookies. It is mandatory to procure user consent prior to running these cookies on your website.